Zsigmond Édes was 17 when he went to Pola and joined the Navy. Military service wasn’t required until age 19 but my great-grandfather would have had good reasons to enlist. Joining the Navy allowed him to avoid being drafted into the army. He probably also wanted to “see the world” as promised by Navy recruiters.

The Navy would have been a good fit for him. Growing up in Vukovar along the Danube he would have had experience on the water. I imagine him as a young boy playing with toy boats with his older half-brother János, and watching the ships cruise by. He may even have worked on boats with his uncles.

The Imperial and Royal War Navy, as it was called, was established after the 1867 Ausgleich, which created the Dual Monarchy of Austria and Hungary. The name in German was kaiserliche und königliche Kriegsmarine, abbreviated as k.u.k. Kriegsmarine. In Hungarian it was Császári és Királyi Haditengerészet.

“The battle fleet stood guard on an Adriatic border that . . . was as long as the Austro-Hungarian border with Russia.”*   During peacetime the Navy provided experience for newly graduated cadets by sending them on overseas missions in many parts of the world to “show the flag”.  They were also involved in scientific expeditions including several missions to the Arctic. Late in the 19th century, there was more emphasis on the role of the Navy to encourage trade and industrial development in the Empire. 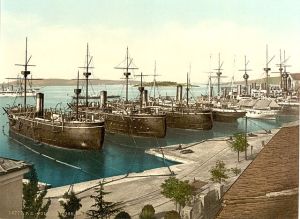 As a seaman, Zsigmond would have served, probably as a mechanic, on board one of the steamships that made up the fleet at that time. He may have participated in one or more of the overseas missions as well as serving on ships that patrolled the Adriatic.

Pola could have been a little intimidating at first for the teenager. The city, more than twice the size of Vukovar, was a bustling port and home of the naval arsenal. Now known as Pula, Croatia, it is in a beautiful location on the Istrian peninsula surrounded by lush green hills. It has been settled for centuries, changing hands many times. On a hill overlooking the Adriatic Sea is one of the largest surviving Roman arenas in the world dating from Pola’s time as a Roman settlement. A Roman forum stands in a busy city square. In Zsigmond’s time, the streets were filled with people in foreign dress, speaking many different languages from all over the Empire and the world.

Zsigmond  had some experience in a multi-national community. His father, for whom he was named, was Hungarian. His mother, Julianna Vill, was  Donauschwaben. Her ancestors were Germans who had settled in that region of Hungary in the 1700s. The Donauschwaben spoke a dialect based on 18th century German that incorporated vocabulary from their neighbors. They lived among Hungarians, Serbians, and Croats.

His childhood was marked by loss. When he was 3 years old his father died of pulmonary edema leaving Julianna with 6 small children.  Two years later János died. The death of a younger sister  followed a few years later.  When he left for the Navy his mother was home with his 3 remaining sisters.  Some of Julianna’s family would have been living with them. But as an older teenage boy, Zsigmond would have been expected to support himself and perhaps contribute to the household.

After completing his 4 years of active duty he stayed in Pola working as a mechanic. It was there that he met Anna Terk from Moravia. They were married in 1885 and moved to Budapest. He completed his naval reserve obligation in 1889. His discharge certificate shows that he advanced from an entry level Matrose classe IV (seaman 4th class) to Matrose classe I.

Zsigmond continued to travel. He lived with his family in cities across Hungary to Transylvania working  for the railway. At the time of his death from tuberculosis in 1903 he was a telegraph supervisor in the Transylvanian city of Nagyenyed. He was 41 years old. As with his father, his death left a widow with 6 children.

His time in the navy was surely a defining period in his life and his stories of glory days as a young seaman in Pola would have inspired his son Imre who later became a captain in the Navy.

Many thanks to Dr. Lawrence Sondhaus, Professor of History and Department Chair of the department of  History & Political Science at the University of Indianapolis.  Through his book and our personal correspondence he provided an understanding of the life and times of a seaman in the Austro-Hungarian Navy of the late 19th century.

Postcard images from Wikimedia commons. Zsigmond would have dressed like that but most certainly would have had a bushy Hungarian mustache.

3 thoughts on “Zsigmond Joins the Navy”