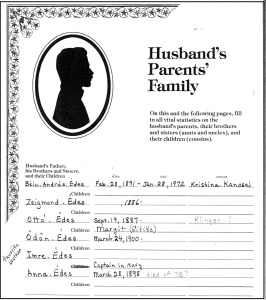 There are those things that we rarely think about when we are young but are more important to some of us when we get older. For instance, what were our parents lives like? Who were the people in their families?

My father escaped from communist Hungary in 1948, came to Canada and married my mother. His parents left after the 1956 uprising and came to live with us. We never met any other members of his father’s family. And now that I am older and they are all gone, I want to know.

Mom pestered everyone for details about all the branches of the family which she dutifully records in the book that my sister gave her for that purpose. Here is the page for dad’s father’s family. There are lots of dates missing. Over the past few years I have managed to fill in some of them. I know when and where all the other children were born. I know when and where their parents died.I found Otto’s marriage record to Erzsebet Klinghammer. Recently I even found the marriage record of elusive Cousin Margit.

But great-uncle Imre has remained a ghost. He was my grandfather’s favorite brother. And a Naval Captain! How could he be so hard to find? I looked in all the places where the other children were born.  I searched every online Austro-Hungarian military database for every imaginable spelling of his name. And I came up empty every time.

The Austrian kriegsarchiv (military archives) require that you have the name, date and place of birth of any enlisted man that you want researched. But out of sheer frustration I finally gave it a try. I wrote and asked if they would be able to search for an officer without those details. Early the following morning the email response came back from the kuk Kreigsmarine (Austro-Hungarian Navy) archive;

I do not know any German but had a pretty good guess what it said. This was confirmed by one of the volunteers at the Facebook group Genealogy Translations;

I feel like I smashed into a 3 foot thick brick wall. I will have to regroup and think of another way to approach this problem.

Until then, I will keep thinking of Imre as a ghost of the Navy that disappeared with the Empire he served in it’s dying days.

2 thoughts on “The Ghost Captain of the kuk Kreigsmarine”