Zsigmond Édes was 17 when he went to Pola and joined the Navy. Military service wasn’t required until age 19 but my great-grandfather would have had good reasons to enlist. Joining the Navy allowed him to avoid being drafted into the army. He probably also wanted to “see the world” as promised by Navy recruiters.

The Navy would have been a good fit for him. Growing up in Vukovar along the Danube he would have had experience on the water. I imagine him as a young boy playing with toy boats with his older half-brother János, and watching the ships cruise by. He may even have worked on boats with his uncles.

The Imperial and Royal War Navy, as it was called, was established after the 1867 Ausgleich, which created the Dual Monarchy of Austria and Hungary. The name in German was kaiserliche und königliche Kriegsmarine, abbreviated as k.u.k. Kriegsmarine. In Hungarian it was Császári és Királyi Haditengerészet. END_OF_DOCUMENT_TOKEN_TO_BE_REPLACED

I found twins! While working on a story about my great-grandfather Zsigmond Édes I rechecked the birth index from Vukovar where he was born. I stumbled upon an index reference to twin sisters, Rosina and Anna, which I had not noticed earlier.

I followed the reference and found that the twins were indeed baby sisters of Zsigmond. END_OF_DOCUMENT_TOKEN_TO_BE_REPLACED

Sírhely  the Hungarian word for gravesite was new to me. Sír (sheer), I knew, means cry and hely (hay) is place. On a day trip from southern Hungary we visited two crying places, scenes of heartbreaking death and destruction that took place over 4 centuries apart. 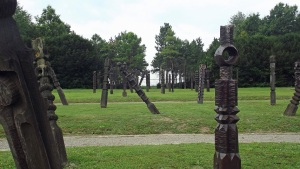 END_OF_DOCUMENT_TOKEN_TO_BE_REPLACED

Generations of the Édes family had lived and died in the Komárom  region now just over the Slovakian border in northwest Hungary.  Zsigmund  Edes, born in Komárom  in 1830 moved 350km south to the city of Vukovar  in Croatia.

View of the Danube from Vukovar, 1917.
photo from Wikipedia Commons

There he married Julianna Vill who was born in Apatin, Bács-Bodrog, Hungary. They were married in the Church of St. Philip and Jacob in February 1858.

Why did they move so far away from their family homes? What do you think brought them to Vukovar? 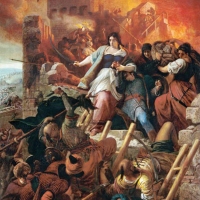