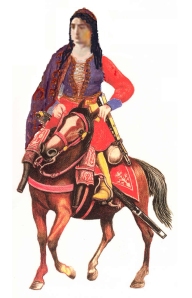 Kerekes Katalin is hands down my favorite ancestor. Our lineage gets a little fuzzy in the 17th century so I’m not sure how many ‘greats’ apply. In the early 1600s Katalin was fighting by the side of her warrior husband, Édes Gergely, and his brothers. She received nobility in her own name because of her valor. This was no small accomplishment at a time when women were considered less than human. She was “a big strong armed woman who fought like an animal’ according to the patent of nobility. Her husband’s family was from Székelyföld. No word about her dad, but Katalin’s mother was a hajdú.

The hajdúk (plural for hajdú) had been peasant cattle drovers on the puszta, the eastern plains of Hungary. Driving herds of the big grey long-horned ‘Magyar szürkemarha‘ to market, they had to become fierce fighters to defend themselves on the vast treeless plains.

END_OF_DOCUMENT_TOKEN_TO_BE_REPLACED

International Women’s Day seems like a good day to write about the courage of warrior women of Hungary. This painting by Bertalan Székely is titled The Women of Eger.  It commemorates the 1552 Siege of Eger during the Ottoman Wars in Europe. The citizens of Eger, outnumbered by about 35,000 to 2,200, fought to defend the Castle of Eger from the Turks. The women joined the battle pouring down cauldrons of boiling water and tar on the oncoming enemy. Together they managed to claim victory that day. The story is well known by every Hungarian student. Unfortunately, later the Turks returned and occupied Hungary for 150 years. END_OF_DOCUMENT_TOKEN_TO_BE_REPLACED