My father was a young physician in Budapest during WWII when standing up for your principles was dangerous. He escaped in 1948. This is the story as he told it in his curriculum vitae soon after his arrival in Canada.

I was born on the 14th day of July, 1921, in Kispest, a city with a population of 70,000 – a suburb of the Hungarian capital Budapest. Being the only son of middle-class parents, who were merchants; I had every opportunity to pursue the career to which I felt most drawn.

At the age of six, I entered elementary school; where a four year course of studies was followed, as a preparation for middle school. In my native country, as in other Central European and most Western European countries, there prevails this middle or Intermediate school, (called “Gymnasium” ) a system assigned to give a preliminary education for University during an eight year course. I graduated from this school with the best qualifications obtainable. 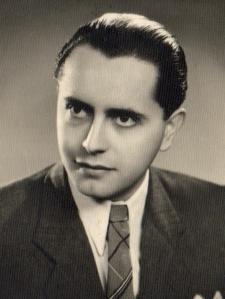 I enrolled at the Medical Faculty of the University of Budapest, and in September 1939, started my studies there in medicine. This course consisted of five years of University study, and one year of compulsory rotating internship.

Soon after my graduation, I was drafted into the Army, but refused to enter. I chose rather the greatest of dangers and uncertainties which arose from this decision. Many of my young colleagues, felt as I did, that this war was not pursued from a patriotic cause, but was a struggle between the totalitarian and democratic ideas.

I think it unnecessary to mention, that this view point was extremely difficult, since our “liberator”, the ally of democratic powers was Russia.

Fortunately, the time spent hiding in the basements and ruins of Budapest, which already was under the fire of surrounding Russian troops, lasted no longer than two months, Even this period seemed to us an eternity. Just before the Russians marched in on January 11th, 1945; I was caught by the German security forces.

It would require further pages, to tell of the fantastic luck I had in escaping, so I shall dismiss the description of events, since this would hardly fit in a customary curriculum vitae.

The ending of the war brought up many problems. Several parts of the Capital were destroyed, and the life in it had to be reorganized. This took time and immense effort, but the optimism of the surviving population produced surprising and admirable achievements, even in the eyes of our Western “visitors”. The enthusiastic spirit for starting a new life was not fully broken by the Russians and the Communistic satellites, in the early post-war years.

The same spirit prevailed, at least for a short time in the University, I felt honoured when I was appointed to a position something like a “senior intern” to the Department of Medicine of the University Hospital in Budapest.

Until my escape from the ever increasing communistic tyranny in 1948, I participated there in a post-graduate study. This consisted of the usual ward service, and also research work.

As members of a team, we were engaged mainly with biochemical studies. The political atmosphere in the last half of 1947- grew constantly worse.

Even the silent home of Science, the University lecture rooms, echoed the Communistic slogans. Those who refused the Communist party were under constant terror. Dismissal from positions, threats to arrest and even to death were commonly employed methods.

The mask dropped, and the Communists were at their full work. Since I openly refused to join the party, like hosts of others, I was left with the only decision possible—to leave the country before too late.

On the 1st of May, 1948; I left for an excursion to Vienna with a group of 200 visitors. Forty-one fellow-citizens, besides myself, “failed” to return to Hungary, despite all precautions taken by the accompanying Communist secret police.

On December the 4th, 1948, I landed on Canadian soil ; after having spent six months in Europe.

I remember Dad telling a few more details of his story.

Like so many young people I didn’t ask a lot of questions about my father’s life and regret that. I have so many questions now.

Five weeks after arriving in Canada he married my mother . . . but that is another story.

6 thoughts on “Escape – My Father’s Story”