290 years ago 25 year old Gérgely Édes and his bride, Éva György were married in her hometown, the port city of Komárom, on the Danube River.

Soon after they married they moved to the nearby town of Komáromszentpéter (now Svätý Peter, Slovakia).

Their first two children were born there; Gérgely in 1726 and Ferencz in 1728. By 1733 when daughter Judith was born, they were living in Komárom where they had 4 more children including István, my 4th great-grandfather.

Gérgely was born in the Édes hometown of Madár, where a few generations earlier our ancestors were granted nobility. Along with the honor and privileges, they received land in the neighborhood. It is likely that Gérgely was working in agriculture in their early years.  In Komárom he could have been a sailor or fisherman or ship-builder. 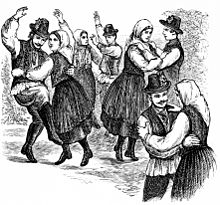 Komáromszentpéter at the time was famous for it’s viniculture. The region still produces excellent wine. (We enjoyed some wine in the vineyard of Madár this summer). I hope that Gérgely and Éva enjoyed good company, fine wine and plenty of dancing at their wedding.