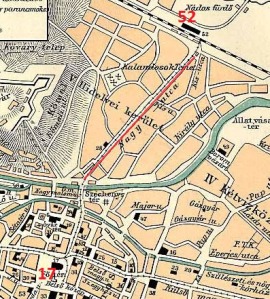 Béla Édes, my grandfather, was 6 years old in 1897 when this map of Kolozsvár was published. His family lived on Nagy utca, shown by the red line drawn on the map.

You may notice the tracks along the street for the villamos (tram) that would have taken the family to the city center (now Unirii Square). 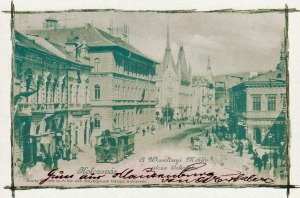 Kolozsvár is located in a wide valley on the bank of the Szamos river. It was described as “a pleasant, clean-looking town, with wide streets diverging from the principal Platz, in which is the Gothic Cathedral of St. Micheal” 1. Szent Mihály templom, as it is known in Hungarian, is at #17 on the map. The imposing cathedral was begun by King Sigismund in 1401 and named for the Archangel Michael, the patron saint of the city. Béla’s Catholic family would have gone there for mass on Sundays, then probably home for a big Sunday meal. 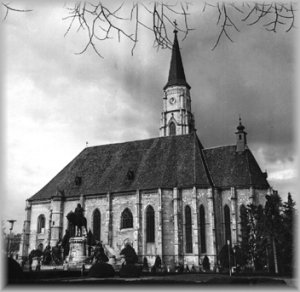 His mother, Anna Terk, grew up in a family of butchers and innkeepers and worked as a cook before she was married. With her culinary skills, and a house full of growing boys, I imagine that meals from her kitchen would have been substantial and tasty. At that time the two oldest boys, Zsigor and Otto, were 12 and 11 and probably had very healthy appetites. Little Anna, the only girl, came along in 1898, followed by Ödön in 1900. One more son, Imre was born sometime in between but we don’t have his birth record.

Fishing was one of Béla’s favorite pastimes. Perhaps he learned to fish with his father and his brothers on the Szamos river near their house. In his later years Béla lived with us in Canada. He learned enough English to communicate with the other fishermen along Saskatchewan River. He was cheerful and outgoing and everyone knew “Old Bill.”

Béla’s father Zsigmond was the telegraph supervisor at the railway station, an elegant building at #52 on the northeast corner of the map. It was a responsible position in a booming industry. The Hungarian railway was expanding at the time into the mountains of Transylvania to transport metals mined there to the rest of the growing country.

Koloszvár was an important Hungarian university-town and cultural center in Transylvania. The city boasted a popular theatre and an internationally known Botanic Garden. The National Museum of Transylvanian History founded in 1859 featured artifacts discovered locally from the ancient Roman settlement of Napoca. These attractions are still there today.

When the family lived there, the population was about 81% Magyar. Today the population is only about 16% Hungarian. The city, now called Cluj-Napoca, is part of Romania. Magyars and Szekelys are still a significant minority in Transylvania.

In 1900 when baby Ödön was born, the family was living in Nagyenyed (now Aiud, Romania) about 40 miles south of Koloszvár. After that the trail goes cold until Béla and his brothers are grown men living elsewhere in the Austro-Hungarian empire. I hope their memories of their childhood in this “pleasant town” were happy ones.

Credits: 1.A Handbook for Travellers in South Germany and Austria: Württemberg, Bavaria, Austria, Bohemia, and the Danube from Ulm to the Black Sea, J. Murray, 1903

Map and Crest from Wikimedia Commons. Picture of Szent Mihály templom from trilulilu.ro. Station from the wonderful blog at Romania Postcards Collection

5 thoughts on “Béla’s Hometown – Growing up in Kolozsvár”